I know that you can’t really tell from this picture, but this is me, circa 2003, hosting a Mayoral Debate as president of the Philadelphia Association of Black Journalists.

This debate, which was a collaboration between PABJ, and the local chapters of the Asian American Journalists Association, the National Association of Hispanic Journalists and the National Lesbian and Gay Journalists Association, was moderated by Comcast newsman Arthur Fennell and featured featured Mayor John Street and his Republican opponent Sam Katz. It also happened just before a FBI bug was discovered in the Mayor’s Office, something that led to the debate receiving nationwide coverage and a gang of indictments afterward.

(When my mom called and said that she saw me on C-Span, I knew we had hit a home run. The Mid-Atlantic Emmy that PABJ and Comcast received months later confirmed that. Phillies’ slugger Ryan Howard had nothing on me that year!)

But while we got a lot of mileage and accolades out of putting that debate together, it also pulled the curtain back on the sausage factory that is Philadelphia’s political process. While politics is the art of the possible, those possibilities cost millions of dollars to try and make happen and involve a lot of sometimes really dirty pool. While it’s not nearly at the level of nasty that national politics (particularly presidential politics), is, it’s still pretty cutthroat. But I get the process now, something that’s made me be able to better analyze it.

Lately, that knowledge has become kind of handy in my personal life.

You see, I’ve entered the world of politics.

A couple of months ago, I decided to run for the office of Vice President-Print for the National Association of Black Journalists. I’ve been an NABJ member since 1994 and it’s allowed me to meet some really good people, visit a lot of places that I probably wouldn’t have on my own (like Chicago’s Wrigley Field), and it’s helped me out in terms of finding subjects for the research I do on African American journalists and objectivity.

But while I’ve been an NABJ chapter president, I didn’t see myself running for national office.

That is, until I started teaching.

While it’s been a long while since I’ve been in a church without being forced to be by (a) a funeral, (b) a wedding, or (c) serious maternal guilt, I still remember the lessons that I was taught in church before I realized that most of the people teaching them to me were no better than I was despite their assertions to the contrary. One of the lessons that has really stuck with me is the lesson of not hurting others.

Now the good thing about being a researcher with an emphasis on Blacks in Journalism is that you get a lot of data and information about how Black journalists are doing within the profession. You get to see such things as newsroom census data, studies about who is covering what, and what that means for the quality of information that Americans receive each day.

That you get this information, and lots of it, is also the bad thing about being a researcher. There have been days where I’ve asked myself if I really want to continue teaching journalism because of the hell that journalists of color are catching on an almost daily basis. Did you know that only 13 percent of the White House Press Corps, one of the most important groups of reporters in the country because they cover our government, is made up of people of color? I got this information from a study done by the Walter Cronkite School of Journalism and UNITY Journalists of Color.

While the information predated the presidency of Barack Obama, not a lot has changed. While reporters of color sometimes get to open up a news conference, they’re still kinda easy to spot. 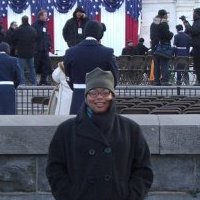 Me at the Inauguration

So after seeing the number of journalists of color contract instead of expand, and remembering that I was actually sending young people out into this on purpose, I decided that I owed it to them to try and make the path as less bumpy as I could. Since the path for Black Journalists wasn’t smooth when I got into the business, and it probably has never been smooth for us, having that as a goal would not only have been far too ambitious, but damn near impossible.

So I’m running for office. I’m hanging out at all the right events, going to candidate forums, and spending money to try and get my message out, something that as a freelance writer and part-time copy editor means more than you know.

But while my campaign manager keeps telling me that this isn’t a so-called “real” election, I’ve gotta say that it has all of the earmarks of one.

There’s a lot of horse trading. You find yourself asking for stuff from people you just had a violent argument with. And memories are long. Real long. Folks bring up stuff you did to them so long ago that you forgot what you did.

It’s been a real eye-opener.

But I’ve been trying to focus on one thing: what does this mean for Black Journalists? Right now, everyone is nursing a case of the “Last hired, First fired” blues in the business. When the Philadelphia Inquirer and Philadelphia Daily News underwent their first round of layoffs after being sold, roughly 71 of the 150 folks scheduled to be laid off were journalists of color.

In fact, every time you see the word “layoff” in the newspaper, you see it connected to at least one or two people who look like me. I’m not saying that white folks don’t get laid off because they do. But when there are more of you in a profession, it doesn’t look as bad.

And, as it is in the newspaper business, your stories still get told.

Without someone in the newsroom advocating for the stories of people of color, and by that I mean the stories that don’t involve someone committing a crime or being on the wrong end of a gunshot wound, those stories don’t get told. That’s good news for hyperlocal websites or specialized presses, but it doesn’t help communities filled with people who don’t have a computer or have no access to a Black, Asian, Spanish-language, Native American or gay and lesbian newspaper.

In other words, folks get left out. I don’t see anywhere in my friend the First Amendment where it says that’s okay.

So I’m trying to get connected to a place where my voice, and voices of the like-minded, can be amplified in such a way that the bean counters who run the media these days have no choice but to pay attention.

That place, near as I can tell, is the NABJ board.

Or at least, I plan to make it that way should I win.

I’ll keep you posted on what happens.

Here’s a picture of me at a recent event. I’m going to be doing a lot of this over the next month and a half. 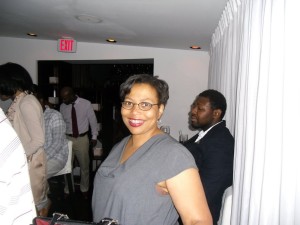